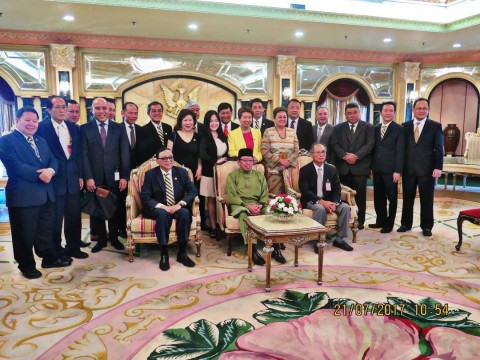 It was the first time for both SCCI and SBF to pay a courtesy call on CM since his appointment as the State’s sixth Chief Minister.

The 22-member delegation presented their respective agendas to the Chief Minister which included invites to SBF’s inaugural Chief Minister’s Industry Excellence Award (CMIEA) Gala Night 2017 on 8 September 2017 at BCCK, Kuching and also SCCI’s Entrepreneur of the Year Awards (EOYS) 2017 on 10 November 2017 at Hilton, Kuching.  The EOYS is a prestigious awards program which has been running since 2004.

President for SCCI and SBF, Datuk Abang Karim expressed his gratitude to the State government for its continuous support, cooperation and collaboration which catalyzes the positioning of SCCI and SBF to better advocate for its members.

SCCI is an established Chamber with a long history of over 6 decades whilst SBF is a new federation representing key organizations and industries in Sarawak established last year.  Both SCCI and SBF strive to promote business and the interests of the business community in Sarawak.