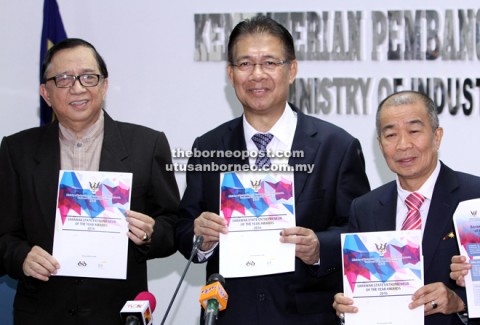 KUCHING: Nominations for the Sarawak State Entrepreneur of the Year Awards (EOYS) 2016 are now open until Aug 30.

Assistant Minister of Industrial Development (Investment and Promotion) Datuk Julaihi Narawi said the prestigious awards have been held annually since 2004 to honour and acknowledge exceptional entrepreneurial talent and leadership.

“EOYS 2016 is important as it provides opportunities for networking and accessing valuable media coverage as well as raising personal and company profiles and also provides a platform for winners to be nominated for national honours, competing among the best in the country,” he told a press conference yesterday.

Julaihi called for more entrepreneurs to participate in the awards, which would be presented at the Sarawak Chamber of Commerce and Industry’s (SCCI) 65th anniversary dinner on Nov 25.

EOYS aims to recognise the best in business in the state – the prime movers that drive the state’s path towards economic growth and vision 2020 – and to recognise the success of up and coming entrepreneurs, who through their ingenuity,

ideas, resourcefulness, commitment and hard work have built businesses that have contributed to the state’s economic growth.

The awards also aim to encourage the growth of small- and medium-sized enterprises in Sarawak.