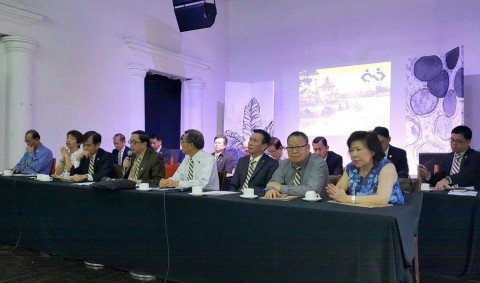 The Sarawak Chamber of Commerce & Industry held its 65th Annual General Meeting in the presence of member companies at ChinaHouse at the old CourtHouse.

Chaired by its President, Datuk Abang Hj Abdul Karim Tun Abang Hj Openg, the AGM took stock of the past year and also to set the direction moving forward.  SCCI had undergone a new committee structure realignment in mid-2015 to better suit the strategic mission of the Chamber.  Focus Groups representing major industries in the State have been set up to serve as platforms for members to connect with their industry peers, share insights on business trends and initiate actions to further the interests of members in their respective industries.

There was also a heightened level of engagement with our regional neighbours with various networking exercises with members of the Indonesia Chamber of Commerce and Industry, the Ambassador of Thailand to Malaysia, and also with the Consul-General of the People’s Republic of China in Kuching.

The AGM was followed by a Buka Puasa Dinner, graced with a pre-dinner address on Tourism and its Challenges by the illustrious speaker and trainer Ms Gracie Geikie, the Protem Chairman of Malaysian Association of Inbound Tourism Association (MITA) Sarawak.