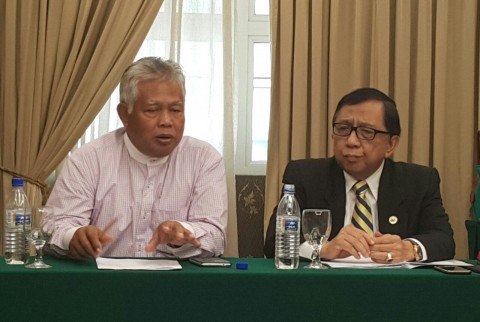 SCCI and MEF :  HRDF has no right to consolidate unutilised employers fund.

The Sarawak Chamber of Commerce & Industry (SCCI) and the Malaysian Employers Federation (MEF) strongly objected to the move by the Human Resources Development Fund (HRDF) to convert the unutilised portion of employers’ contribution under the 1Malaysia Globally Recognised Industry Professional Certificate Programme (1MYGRIP) to a consolidated fund.

MEF Executive Director Datuk Hj Shamsuddin Bardan, based on industry’s recent meeting with HRDF, informed that HRDF still intends to continue with their plan to utilise 30% of the employers’ unutilised fund to run training programmes.

SCCI President Datuk Abang Hj Abdul Karim Tun Abang Hj Openg also strongly objected to the decision by HRDF to transfer the unutilised RM71.1 million employers’ fund to a consolidated fund, especially without the consultation and consent of employers in Sarawak which contribute to the HRDF.

“We see it as our duty to raise the awareness of this issue to employers, particularly those in Sarawak” said Datuk Abang Hj Abdul Karim.  “The utilization of the funds does not fully benefit employees in the State compared to those in the Peninsula as Sarawak is constrained in part, by its size, communications network and inadequate facilities.  As such there is a greater need for constant consultation with the stakeholders in the State.”

1MYGRIP was implemented on 1st August 2015 whereby 30% of employers’ monthly one per cent contributions (or about RM86.3 million) was channelled into the 1MYGRIP account starting June 2015 to fund the training of employees of HRDF-registered employers.

However, of the RM86.3 million that was channelled to the 1MYGRIP, only about RM15.2 million was utilised to date, giving rise to the unutilised amount of about RM71.1 million.

As such, based on HRDF Circular No. 9/2015 dated 22 Dec 2015 the remainder RM71.1 million will be put into a consolidated fund to be utilised by HRDF-registered employers on a ‘first-come, first-serve’ basis.

“It is also not clear how much of the RM100 million Government matching grant released thus far was used to fund the training of employees of HRDF-registered employers.”

This matter of contention is compounded by the issue of among others, inaccessibility of approved courses at approved training providers, insufficient funds in the individual employers’ 1MYGRIP accounts and expensive courses.

Both SCCI and MEF are of the view that the 30% unutilised fund of the employers under the 1MYGRIP be returned to individual employers’ accounts at the end of the 1MYGRIP which is end of April 2016.