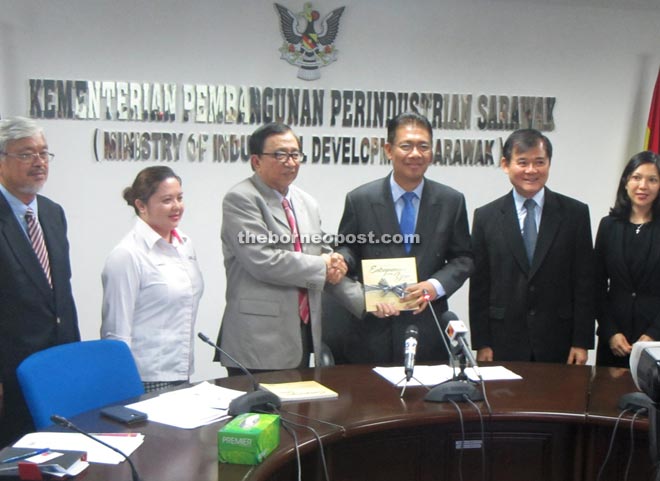 Abdul Karim (left) presenting a memento to Julaihi during the press conference.

“There are a lot of entrepreneurs who are doing well but have been keeping low profile. We would like to encourage them to join this nomination because we want to give recognition to entrepreneurs who have built their businesses which contribute to our state’s economic growth,” he told a press conference at Wisma Sumber Alam at Jalan Stadium here on Tuesday.

He said more than 40 entrepreneurs had been given recognition since the ‘EOYS’ was started in 2004.

He said the EOYS is jointly organised by the Ministry of Industrial Development (MID), SCCI and Ernst & Young.

As for the CES, Julaihi said it is a new award programme jointly organised by MID, SCCI and Swinburne University of Technology Sarawak and SME Corporation Malaysia (SME Corp), and supported by Ernst & Young.

This new programme, he said, is aimed at showcasing outstanding business organisations with significant links to the state and to celebrate the achievements of their owners, employees and the community that supports them.

Abdul Karim, who also spoke, mentioned that the awards were not confined to a specific sector, adding they had received entries from timber, oil palm, manufacturing, shipping, development and even tourism sectors.

“These awards are not confined to any sectors, all are welcomed. Nominations for both awards can be submitted to SCCI by business associations or individually,” he said.

Nominations will close on Sept 1. Both awards will be presented at the forthcoming SCCI 64th anniversary dinner on Nov 20.

The Outstanding Entrepreneur category is for those running a successful business in Malaysia or overseas.

Companies with registered address in Sarawak and/or significantly owned by Sarawakians may be nominated, subject to fulfilling the award’s eligibility criteria.

The judging panel will comprise senior management representatives from MID, SME Corp and Swinburne Sarawak, while results will be audited by Ernst & Young.

Participants will be assessed based on rigorous set of quantitative and qualitative performance indicators over a three-year period.

The quantitative factors include financial performance indicators such as operating profit before tax, turnover and profit growth.

The judges will use weighted marks for responses to each indicator in order to arrive at their final decision.

More information can be obtained by contacting the secretariat, SCCI, at 082-237148.